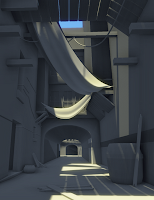 Like with most of these projects, the perspective is always off from the original concept due to exaggeration used by the concept artist.

Posted by Geniusprime at 2:22 PM No comments:

This is the scene in the editor.

Posted by Geniusprime at 10:25 PM No comments:

When I started to use the SandBox2 editor, I ran in to the issue of my textures disappearing after importing it into the editor. The reason for this is that the editor is setup to use Alien Brain which is a version control software and because it not installed or setup on most systems, it causes the core files of the game engine to be permanently locked. The solution to this is disabling the version control software.

Posted by Geniusprime at 9:10 PM No comments:

Posted by Geniusprime at 9:08 PM No comments:

These are some of the renders I did in both engines. I believe the main reason the CryEngine looks better is due to the better handle of textures and realtime lighting. The CryEngine allowed me to maintain the texture integrity without significant degradation by setting the Anisotropic filtering to 16X on the material's textures.

Here are some screen comparisons 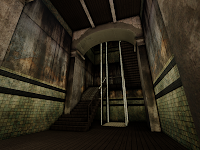 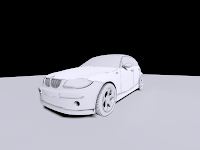 CryEngine
Posted by Geniusprime at 8:58 PM No comments:

I am unable to create a script that would import everything from the selected group in the Content Browser of the Unreal Editor. Its not that its impossible to accomplish but there is a lack of documentation on executing commands and scripts while in the Editor vs Game. Even though all of the required scripts are present to make such an addon possible, the lack of information on running class independent of game triggers, post and pre game commands accomplishing this task seemed to go beyond the scope of what I am trying achieve. However, I believe it would be possible to create such a script as I get more familiarised with scripting and the overall limitations of both the technology and the availability of documentation.
Posted by Geniusprime at 2:58 PM No comments: